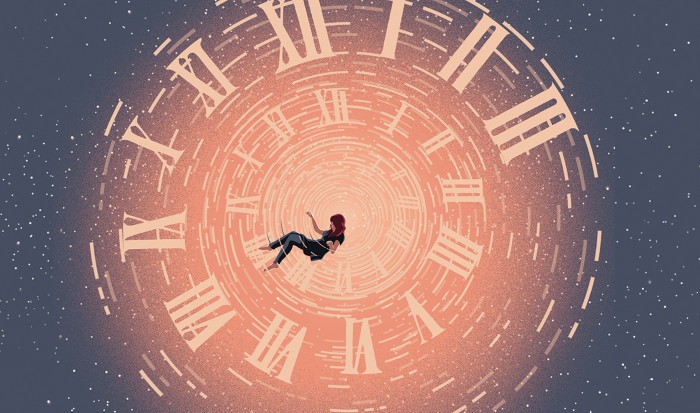 Let’s begin with a simple fact: time passes faster in the mountains than it does at sea level! The difference is small, but it has been measured and it can be measured with precision timepieces that can be bought today. With practice, anyone can witness the slowing down of time. With the timepieces of specialized laboratories, this slowing down of time can be detected between levels of just a few centimeters apart: a clock placed on the floor runs a little more slowly than one on a table.

It is not just the clock that slows down: lower down, all process is slower. Two friends separate, with one of them living in the plains and the other living in the mountains. They meet up again years later: the one who has stayed down has lived less, aged less…Lower down, there is simply less time than at altitude.

The Slowing Down of Time

If I’m at a mountain and you are at sea level, which are say 1000m apart from each other in height will be off by 31 millionths of a second. This was proved by atomic clock experiments.[3]

It is surprising, but this is how the world works. Time passes more slowly in some places and more rapidly in others. The fact that time does not pass uniformly everywhere was first understood by Albert Einstein.

Clocks may run well at different speeds in the mountains and in the plains, but is this really what concerns us about time? In a river, the water flows more slowly near its bank, faster in the middle- but it is still flowing.

Past and future are different from each other. Cause precedes effect. Pain comes after a wound, not before it. The glass shatters into a thousand pieces, and the pieces do not reform into a glass. We cannot change the past, we can have regrets, remorse, memories. The future instead is uncertainty, desire, anxiety, open space, destiny perhaps. We can live towards it, shape it because it does not yet exist. Everything is still possible … Time is not a line with two equal directions but is an arrow with different extremities. This is the fundamental thing about time. The secret of time lies in this slippage that we feel on our pulse, viscerally, in the enigma of memory, in anxiety about the future.

What exactly is flowing? What distinguishes the past, it is has been, from the future, it’s not having been yet, in the folds of the mechanism of the world? —- Nineteenth and twentieth-century physics engaged with these questions and ran into something unexpected and disconcerting —- the difference between past and future, between cause and effect, between memory and hope… in the elementary laws that describe the mechanisms of the world, there is no such difference.

A Prussian professor named Rudolf Clausius grasped a fundamental law that was destined to become famous. He told that if nothing else around a process changes, heat cannot pass from a cold body to a hot one. The crucial point here is the difference from what happens with falling bodies: a ball may fall, but it can also come back up, by rebounding, for instance. But heat cannot. These are the only basic laws of physics that distinguish the past from the future.  Not Newton’s laws, not the equations of electricity and magnetism formed by Maxwell. Einstein’s on relativistic gravity, nor those of quantum mechanics devised by Heisenberg, Schrodinger, Dirac…None of these equations distinguishes the past from the future except for one!

Clausius introduced a quantity that measures the irreversible progress of heat in only one direction and it was called “Entropy”.

“It is the only equation in fundamental physics that knows any difference between past and future. The only one that speaks of the flowing of time. Behind this unusual equation, an entire world lies hidden”.[1]

Ten years before understanding that time is slowed down by the mass, Einstein had realized that it was slowed down by speed. The fact is quite simple. Instead of sending the two friends to the mountain or the plain respectively, let’s ask one of them to stay still and the other one to walk around. Time passes more slowly for the one who keeps on moving. The one who moves ages less quickly, his watch marks less time passing. For everything that moves, time passes more slowly. It was first measured in the 1970s, using precision watches on airplanes. The watch onboard a plane displays a time behind that displayed on the ground.

Electricity and magnetism are well described by Maxwell’s equations. These contain the usual time variable t but have a curious property: if you travel at a certain velocity, then for you the equations of Maxwell are no longer true unless you call ‘time’ a different variable: t’. Mathematicians had become aware of this curious feature of Maxwell’s equations, but no longer had been able to understand what it meant. Einstein grasped its significance: t is the time that passes if one stays still, the rhythm at which things occur that are stationary, like me; t’ is your time, the rhythm at which things happen to move with you; t is the time that my watch measures when it is stationary; t’ is the time your watch measures when it is moving. Nobody had imagined previously that time could be different for a stationary watch and one that was being moved. Einstein had read this within the equations, by taking them seriously.

Thus, a moving object experiences a shorter duration than a stationary one.

Not only is there no single time for different places— there is not even a single time for any particular place! A duration can be associated only with the movement of something, with a given trajectory. ‘Proper time’ depends not only on where you are and your degree of proximity to masses; it depends also on the speed at which you move. [4] [1]

It’s a strange enough fact in itself, but its consequences are extraordinary.

Suppose someone has gone to Proxima b, the recently discovered planet that orbits a star at approximately four light-years away from us. If I ask him, what is he doing, the only correct answer is that the question makes no sense. Telescopes are time machines. In the words of physicist Dr. Robert Picconi, “Telescopes show us the past as it is actually happening”. If Proxima b is four light-years away, it means light takes four years to reach earth. Now if we look at Proxima b through a telescope we will see what is happening exactly four years ago not the present! [2]

Suppose two galaxies are 400 million light-years away. This means that light takes 400 million years to reach the earth. We do not see the galaxies as they are today; we see them as they were 400 million light-years ago—- in the throes of cataclysmic collision. What we see here happens 400 million years after it happened there. The ability to see the cosmic past actually unfolding before our eyes is a tremendous boon to science. Astronomers don’t have to wonder when or how the galaxies were formed. They can directly see what, when and how everything happened because live images have been preserved in the time capsule of light across the vastness of space.

If your sister is in the room and you ask what she is doing now, the answer is usually an easy one: you look at her and you can tell. If she’s far away, you call her and ask what she’s doing. But take care if you look at your sister, you are receiving light that travels from her to your eyes, the light takes time to reach you say a few nanoseconds—a tiny fraction of a second— therefore, you are not quite seeing what she’s doing now, but what she was doing a few nanoseconds ago.

These unknown facts and characteristics of “Time” are still unknown to many of us. For in the words of Nathaniel Hawthorne, “Time flies over us but leaves its shadow behind.”

Want to know more about stuff like this? Then hit the “Yes I’m Curious” button.